Microbreweries are Growing in Vermont with SBDC Help 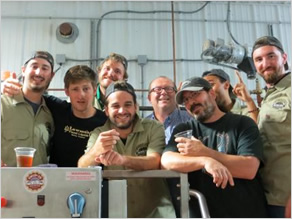 Every homebrewer who has sipped his or her own creations and tasted the satisfaction of a job well done has likely at least contemplated what it would be like to share their recipes with the world, or to make a living from their passion for handcrafted beers. And many Vermont brewers have taken steps to make that dream a reality. But there’s a lot more to a successful brewery than making great beer.

Vermont breweries like Hill Farmstead Brewery in Greensboro and The Alchemist in Waterbury are garnering national attention and an almost cult-like following for their products. It’s easy to see why new breweries are popping up throughout the state and beyond. While rockstar brews like the Alchemist’s Heady Topper may make going into the beer business seem like a no-brainer, opening a brewery is a serious and often expensive undertaking that should not be delved into on a whim.

With the ever-increasing number of breweries looking to open their doors in Vermont and beyond, the need for a well thought out business plan and financial outlook are becoming more important every day. The challenge for craft brewers is to position their brewery to ensure success. That’s why advisors at the Vermont Small Business Development Center (VtSBDC) are working in conjunction with the American Brewers Guild to offer brewers across the country comprehensive instruction on the business side of brewing.

Last fall, VtSBDC craft beverage specialists Charley Ininger and Steve Paddock teamed up to create an in-depth eight-hour class to better equip would-be brewers with the tools necessary to understand and navigate the many challenges involved with opening a brewery. The class was first presented in Middlebury in summer 2014, as part of weeks-long brewing instruction originally created by American Brewers Guild Founder Steve Parkes. The Intensive Brewing Science & Engineering course Parkes created is a 22-week distance education program, with a final week of residential instruction.

Parkes spent weeks working with brewers teaching them the ins and outs of brewing beer before VtSBDC advisors were brought in to provide potential brewery owners with a better understanding of the business side of brewing.

Participants in the course are first introduced to the various models of brewing and then walked through writing a business plan that fits their expectations. Next, potential brewers are told of the financing options and walked through the many legal obligations associated with opening and running a brewery. Participants are also informed of potential trademark issues, zoning complications, risk management techniques and business entity decisions, among many, many other things.

The brewing for business portion of the class will be offered in conjunction with the American Brewers Guild again this summer. Ininger also works with potential brewers on an individual basis as they work through the important decisions regarding whether or not to become a brewer and what type of brewery is the best option, among many, many other decisions. Most recently, VtSBDC breweries advisors worked with Paine Mountain Brewing Company in Northfield, which opened its doors this past winter.

“When I was ready to dive into the brewery project, I was introduced to Charley (Ininger) and VtSBDC and their services,” said brewery owner Kevin Pecor. “The process, assessment and experience was outstanding. The deeper the exploration of the business model, the dissection of the financials and what it would take was executed with precision.”