8 Days to the Showcase! 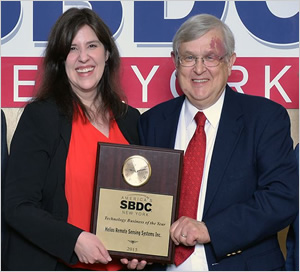 Radar is involved in many different parts of our daily lives, such as the Doppler radar used to forecast weather or automatic position sensing in automobiles. An acronym for RAdio Detection And Ranging, radar describes the energy that detects a target’s range and motion. One small business in Rome, New York, Helios Remote Sensing Systems, Inc., is taking radar technology to new heights and keeping our nation’s military and intelligence forces the best equipped in the world.

In 2007, Walter Szczepanski was ready to start his technology company after a career with GE Aerospace in Utica, NY and Lockheed Martin in Syracuse, NY, working on airborne sensors. Helios initially employed just Szczepanski and his business-savvy daughter, Janine, but then quickly grew to include more employees in the following years. Walter and Janine turned to business advisor David Lerman at the Mohawk Valley Small Business Development Center (SBDC) for help with a business plan to launch Helios Remote Sensing Systems. Janine worked with Roxanne Mutchler, the statewide SBDC government contracting expert, to access BIDLinx, a free SBDC program which sends customized listings of contracting opportunities right to her email address.

In addition to the company’s success with BIDLinx, Helios grew strategically with winning proposals in the U.S. Small Business Administration’s (SBA) Small Business Innovation Research (SBIR) and Small Business Technology Transfer (STTR) programs. With 18 awards totaling $5.5 million over the past eight years, both programs have helped Helios fund the research and development of innovative technology for use by many federal agencies. In April, 2015, the NYS SBDC honored Helios as the 2015 Small Technology Business of Year for New York State.

“Helios provides innovative solutions with applied research and development for real-world problems and our primary customer is the U.S. government, such as the Department of Defense, Department of Energy, and various national intelligence agencies,” explains company founder Walter Szczepanski. “We do a lot of advanced radar design and development. Our other lines of business include electronic intelligence support capabilities and image analysis and exploitation. To pursue these three business lines, our company creates process design, advanced signal/data processing algorithms, real-time software, and prototype development.” 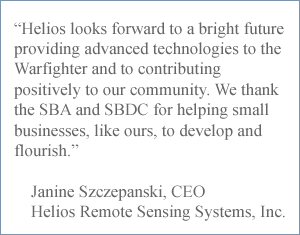 Today, the 12 staff members at Helios Remote Sensing Systems have a strong knowledge base for its radar application development, with several employees that have over 40 years of radar experience at GE and Lockheed Martin. The highly sensitive nature of their work requires a government facility clearance and employees that are required to maintain government security clearances. Located in the Griffiss Business and Technology Park, Helios is just down the street from the U.S. Air Force Research Laboratory/Information Directorate. Its location also allows Helios to be a part of NUAIR Alliance, one of six Federal Aviation Administration (FAA) selected sites in America to qualify small Unmanned Aerial Vehicles (UAV), also known as drones. Helios is developing new sensing technology for the U.S. military and intelligence community directly related to the surging UAV industry.

2014 was a banner year for Helios, with the company developing three innovative small radars. Developed through the SBA SBIR Phase II program, the first was a helmet-mounted radar system for the U.S Army, Aberdeen Proving Grounds, that offers soldiers 360 degree situational awareness in both urban and rural settings. Today, Helios is extending the helmet mounted radar system technology to provide greater detection ranges and additional functionality. Future enhancements include technology that migrates the radar products from the helmet to a Google-glasses type visualization screen that soldiers can wear on their face. The display screen integrates the outputs of many different types of technologies and sensors on the battlefield into one common visualization.

“SBIR is a great program for small businesses. The Federal Government provides funding if you have an innovative idea and they give you the intellectual property rights for four or five years. This particular radar provided the technology base for the next two radars we developed. SBA was instrumental in helping us get Phase I award for this contract by issuing a Certificate of Competency to prove that we were capable of performing in spite of our small size,” said Walter.

Also in 2014, Helios partnered with two other companies on a six-month joint IR&D project to build its second radar product that can penetrate dense foliage for use by the Navy. In June, 2014, Helios, along with its two partners, demonstrated the radar for the Department of the Navy at Eglin Air Force Base in Florida in a two-day trial with great success. The team was selected over four other competitors to win a follow-on contract to take the prototype radar and build it into an Engineering Development Model, EDM.

The third radar development was a joint IR&D effort, partnered with a second small business, to develop a sense-through-the-wall (STTW) radar. Helios improved the radar capabilities so users can “see” movement through non-metallic walls of various materials, such as concrete walls. The ultimate goal is for a small hand-held device that has integrated radar, visualization, and controls for ease of operator usage. Helios demonstrated the STTW radar system to the US Special Forces at Muscatatuck Urban Training Center in Indiana and showed the capability to detect people through brick buildings using its proprietary motion sensing technology. This radar is so advanced it can pick up heartbeats and breathing movement in people who are trying to remain absolutely motionless. Unlike heat-sensing technology, the radar developed by Helios is able to penetrate walls of any non-metallic type and at a far greater distance, advantages critical in military and hostage rescue operations. The radar’s digital processing is so advanced it’s surprising that the system requires less power than a cellphone to operate.

Helios became an Economically-Disadvantaged Woman-Owned Small Business in January, 2015 when Janine became Chief Executive Officer of the company. The transition to the next generation of ownership has been a smooth one at Helios.

“What works well for us is that we have different strengths. My dad is strong in technical areas, while I am stronger in business operations and we complement each other well,” says Janine. “Everyone in the company is interested in making things that work, not just doing research for research’s sake. In our small company, you may have a title, but we are all involved in bringing new ideas to the market in every project. ”

Janine plans to continue to build on the company’s strong external relationships. Teaming with other small businesses, universities and their laboratories, and large corporations such as SRC and Lockheed Martin, will help the company’s strategic growth and smoothly handle production of their successful prototypes. The dynamics of change continue this year as Janine guides Helios’ pursuit of new commercial customers for its image analysis and exploitation capabilities in the agriculture industry. Helios is working with Cornell Cooperative Extension to help farmers use aerial photo data for crop analysis instead of having to walk the fields to identify problems. Targeting this industry will help diversify Helios’ customer base for commercial applications of their research and development successes. Agricultural consultants can access the aerial images and data analysis from UAVs in real-time on a tablet created by Helios.

The America’s SBDC Client Showcase & Reception will be held from 5:30-7:30 pm on Monday, February 1, 2016, in Caucus Room 345 of the Cannon House Office Building . Invite your Members of Congress to the showcase and reception! Contact your Representative and your Senators.

For more information about America’s SBDC or to find an SBDC near you, visit www.AmericasSBDC.org.