Administrator Linda McMahon, head of the U.S. Small Business Administration, announced on March 16th, 2017, this year’s Small Business Person of the Year winners from the 50 states, the District of Columbia, Puerto Rico, Guam and the U.S. Virgin Islands.

“It is my honor and distinct pleasure to announce the 54 winners from across the U.S. and its territories,” McMahon said. “These small business owners define entrepreneurial spirit and best represent the 28 million small businesses that are the backbone and economic engine for today’s economy. I look forward to welcoming the winners to Washington next month when they are officially honored for their achievements.”

Combining 19th-century charm with 21st-century technology, Hometown Trolley has more than 2,300 cars in public and private transportation use, mostly in the United States, Canada and the Caribbean.

Kristina Pence-Dunow, President and CEO, has led the company through a complete turnaround and modernization since 2010. Hometown Trolley acquired its major competitor, built a new 18,000-square-foot production facility and grew from 12 employees to 47. Sales have quadrupled since 2013 and are projected to increase through next year.

The company’s growth can be attributed in large part to a commitment to innovations that include such “green” options as propane and natural gas, as well as the first all-electric, zero-emission model. Hometown Trolley also improved its appeal and accessibility with a “low boy” floor design that offers street-level boarding. 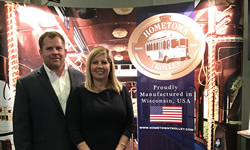 “It truly is a team effort from local suppliers, dedicated employees and the new energy from my children taking leadership roles in the business as adults,” Pence-Dunow said. “With each leap of faith, we are reaching our goals, and it is amazing to see how far we have come over the years.”

“When I first visited Hometown Trolley, it was evident that this was a business where ownership had a compelling vision,” said Chuck Brys, SBDC consultant. “Our role was to help crystallize that vision and assist in converting that vision into a tangible concept. It has been most gratifying to watch Kristina and her team convert what had been a small but quality company into the clear market leader in North America, and evolve Hometown into a major manufacturing employer in the region.”

Congratulations Hometown Trolley on your “Small Business Person of the Year” win in Wisconsin and on being a National Finalist!

To learn more about the Wisconsin SBDC, click here.