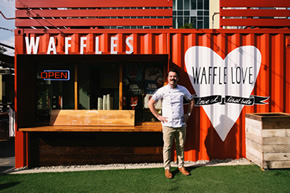 SteelCraft was born from developers Kimberly Gros and Martin Howard’s idea to re-purpose shipping containers from the Ports of Long Beach and Los Angeles as counter-service restaurant locations for local artisan food vendors. After more than two years in planning and development, SteelCraft has attracted eight businesses, which have generated more than 60 jobs in the Bixby Knolls area of Long Beach.

When Long Beach resident Kim Gros first visited the SBDC in 2014, she envisioned re-purposing a shipping container as a counter-service ice cream shop downtown. However, after reviewing projections with the SBDC, which included multiple vendors in one space as opposed to a single vendor, she quickly began to dream bigger.

“The SBDC was a huge part of this success. They kept us dreaming,” said Gros. She re-imagined her vision to include several re-purposed containers that would convene the community through craft food and drinks. The SBDC then helped Kim with her financial projections, her lease agreements for her eight vendors, and assisted her in obtaining a loan for the project.

In addition, the SBDC consultants introduced her to several public officials who offered support and guidance along the way. “Kim had a winning attitude from the start. With a little guidance, she hit the ground running and didn’t stop. SteelCraft is a unique addition to the Bixby Knolls community and is sure to stimulate economic impact now and in years to come,” said Mike Daniel, Regional Director of the Orange County Inland Empire SBDC Network, who consulted Gros.