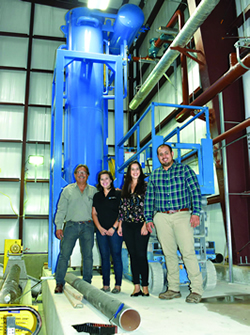 Packaging crushed ice into 40 lb. paper bags was the earliest stage of a business that would grow to serve clients across Central and South Texas. Located in San Antonio and opened by Jesus “Jesse” Mireles III in 2001, Mireles Party Ice is the culmination of a family business that has evolved from early roots.

In 1974, with the help of his father, Jesse and his wife Melinda Mireles opened a grocery store that catered to various events, with a high volume of requests for kegs and ice. Although the store became the largest keg distributor in San Antonio, Jesse found greater value in focusing the business on ice manufacturing. Through the 1980’s, the couple purchased ice blocks from local ice companies and packaged crushed ice in paper bags. By the 1990’s, Jesse had acquired two 2,400 lb. ice makers, and in 2001 he built his first ice plant.

The company secured a $2.6 million SBA loan and has created and retained 35 jobs. Today, the business is in the midst of growing into its second location. With plans to shut down the original location, the new 26,000 square foot facility has the capacity to produce up to 350 tons of ice per day. The company’s 12 operating trucks deliver to a diverse client base, including convenience stores, restaurants, bars, construction companies, airlines, food processors and more. By 2020, the company plans to expand its region farther South.