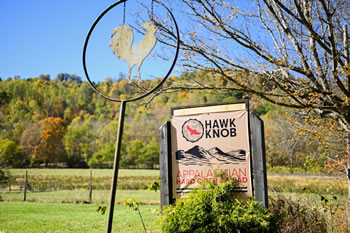 Morgantown was Josh Bennett’s home while he attended West Virginia University in 2006, but the distance between the college town and the farm he grew up on in Highland County, Virginia stretched further than the 150 miles of country roads separating the two locations. As far as Bennett was concerned, city living and farm life were a world apart.

Bennett had a genuine passion for agriculture and couldn’t wait to get back to his roots once he finished studying horticulture at WVU.

“All I knew was that when I got out of college, I wanted work with agricultural products,” he said. “I wanted the agrarian lifestyle.”

Bennett only needed to find a way to make it all work.

From passion to business

Making cider was one aspect of working on a farm that Bennett remembers most fondly. Unlike the cider you find in a grocery store, Bennett’s cider is made from the fermented juice of apples. During his time at WVU, “hard” cider became more common in the United States, after centuries of popularity in the United Kingdom. Bennett realized there was little representation in the market for the cider he was used to making and drinking — dry, unfiltered and aged to perfection.

“Cider draws its characteristics from the apples it’s made from, so you want to use the right ones,” he said. “There’s a reason you make wine from a pinot noir instead of a concord grape. Same thing goes for the heritage apples used in our cider making.”

By focusing on tradition and craft-quality, Bennet found his niche. Unlike sweeter ciders on the market, Hawk Knob doesn’t have added sugar, water or other additives. It’s also unfiltered and barrel aged. Within a year, Hawk Knob’s ciders were in Fayetteville, Charleston, Morgantown and Canaan Valley. But Bennett soon found out that passion for the product doesn’t guarantee business success. 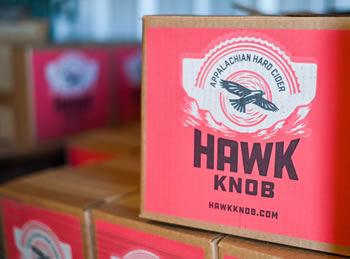 Finding investors and working capital when he started proved difficult, so Bennett put everything he had into getting his business off the ground. Fortunately, Hawk Knob was one of the lucky businesses that made it all work. Within a few years, things were paying off and Hawk Knob gained a reputation for doing something special.

“After a few good years, we hit a stage in the business where I saw changes in the market and needed to make some adjustments if we were going to continue being successful,” Bennett said. “I needed to find someone to work with to drive the growth of the business even more.”

That’s when Bennett learned about the West Virginia Small Business Development Center. In spring 2018, he connected with business coach Shannon Mitchell and, together, they worked on a new business plan for Hawk Knob.

“We looked at their cost of goods and analyzed the data so they could be in a better position when they approached a lending institution,” Mitchell said.

“You can have great ideas and work ethic, but SBDC will help you with the business background and organization side of things,” he said.

Since then, Bennett has received the capital he needed to improve Hawk Knob’s branding and production. Distribution now extends all over West Virginia, Virginia, Maryland and into Washington, D.C. As for the future, Bennett plans to introduce new products, such as canned and kegged cider.

“If I could give people starting out or looking at opening a business one piece of advice, I would tell them to be ready to work 80 hours a week, so you don’t have to work 40,” Bennett said. “Owning a business is a lot of hard work, but it’s rewarding to do something you love.” Learn more about Hawk Knob Appalachian Hard Cider here.

Bennett is one of the many small business owners the West Virginia Small Business Development Center has helped over the years. West Virginia SBDC coaches are experienced in many industries and can help start or grow a business in West Virginia through one-on-one coaching and facilitating connections to resources. For more about the West Virginia SBDC, visit wvsbdc.com. If you have dreams of starting your own business, have a big idea you think will change the world, or just want to have peace of mind knowing your business is headed in the right direction, contact an SBDC adviser today. To find your nearest SBDC anywhere in the United States and its Territories, click here.