Franchising In An Affordable Way 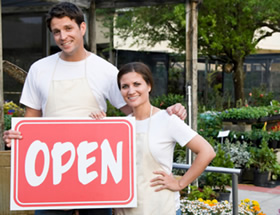 Several economists and financial sources cite that, while things have steadily (albeit slowly) improved, America may be in the midst of a “new normal” in terms of its level of improvement. Suffice to say, very few businesses in corporate America have been able to escape the cycle of downsizing and outsourcing.

Executives previously locked into so-called “safe” environments have found themselves alongside the bevy of recent college graduates—all scouring limited job opportunities rife with qualified candidates. In the most conservative estimate, it is proffered that—at a minimum—there are three candidates for every corporate job opening today. Facts and figures such as these have led to a sea-change in attitude. From those willing to initiate an investigation of small business ownership to the full-on “I can’t take it anymore!” crowd, it seems as if alternatives to working for others have truly been replaced by the attraction of working for themselves.

Of all considerations poured into the discovery and investigation of small business or franchise ownership, what is one of the biggest misconceptions? Money. Specifically, the amount necessary to invest in a worthwhile opportunity that leads to financial independence. Ask most potential prospects and franchise candidates about the capital necessary to invest in their future and you’ll likely hear an astronomical figure that has no real basis in fact.

A full one-third of more than 3,100 small business franchising opportunities require an average buy-in cost of $50,000 or less. Add the fact that most—if not all—will finance the largest portion of funds necessary to begin. All of a sudden, a dream of franchise or small business ownership can be converted into a path leading to financial independence.

And there’s even more good news. How would you like for your initial investment amount to fall into the tax-free and penalty-free category? Well, it’s true. Funds from your personal 401k account can be “rolled over” to provide the capital necessary to get your franchise up and running. Without the dreaded “early withdrawal” penalty.  FranNet can point you to resources to understand your opportunity.

If you’ve read a surprising statistic or two in this blog, perhaps the time is right for you to consider a no-obligation consultation with a FranNet advisor. If you’re willing to pay zero dollars and zero cents for the privilege of receiving this advice, you’re what FranNet calls its target audience. In reality, franchising and small business ownership is not beyond your reach. And achieving financial independence on your terms instead of relying on corporate America is becoming a safer bet in these “new normal” times. Find out where you stand and how to unlock your finance potential in the world of franchise ownership today.