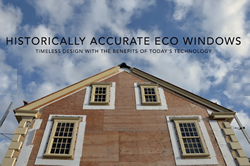 From an early age, Brian Cooper of Pawcatuck, Connecticut, was drawn to woodworking. In high school, he took the maximum number of trade classes possible, and during that time he built a Grandfather’s Clock. “Woodworking is in my DNA,” Brian says. Unbeknownst to him, he became the same type of craftsman his grandfather was, a family member he never had the opportunity to meet.

Brian started professionally as a boat builder and cabinet maker, and years later found out that his grandfather was also a boat builder and cabinet maker. He eventually inherited all of his grandfather’s tools, which had his name stamped into them. It is serendipitous that Brian is in the profession he is in. While working in the boating industry, the construction of wooden boats started to become obsolete. Brian wanted to continue to pursue his craft of working with wood and checked out a 18th century home. He dismantled it, preserving the 300-year-old wood, and started on the next phase of his career of restoring early New England homes and buildings to museum quality — making his own nails and windows.

Then a trend started where builders did not possess the preservation mentality and historic buildings were getting burned or bulldozed and not preserved. His business then turned to dismantling the entire building and storing it in trailers so it could be reconstructed in another location. Then a recession hit, and It was a painful time for Brian and The Cooper Group. He had to lay off 40 employees.

It was then that Brian recognized he needed a plan to recession-proof his business. He analyzed construction and realized that the ‘soul of a house is born through its windows.’ He studied the window business and how he could incorporate historical architecture with the technology of today. He developed a window series combining 19th century recycled glass and therompane technology with high wind and security ratings.

He further knew that building inspectors require a rated window, so he had to figure out how to protect the window from hurricanes, theft and other issues. Brian’s window crafting rose to the next level when he created a hurricane shutter that is integrated above the widow and comes down in front. The best part is, you can run this technology from an iPad, mobile phone — or from anywhere in the world. A Smart Window, and a subsidiary of The Cooper Group — Cooper Windows — were then born. Adding to the smart technology, an email is sent to the owner and the manufacturer confirming that all window shutters have closed, and if one did not, a truck goes out to fix it within 24 hours. This is imperative for insurance companies.

The Cooper Group wanted to continue to grow in manageable phases. Brian sought the assistance of the Connecticut Small Business Development Center (CTSBDC) and met with Matt Nemeth, Business Advisor. They discussed strategies that involved marketing, training employees, growth, manufacturing locations and more. They got to work on securing funding through the Manufacturing Assistance Association, and with this funding, Brian was able to improve many facets of his business, including technology upgrades, worker training, and advertising to promote the business. He was able to hire 10 employees with this program. Currently, The Cooper Group is back up to 43 employees. Of those, the services that the Connecticut SBDC has provided enabled Brian to retain 30 jobs and create 10.

Additionally, Matt introduced Brian to other fruitful partnerships, including one with the Connecticut Procurement Technical Assistance Program (PTAP), where they discussed a Command and Confirm window to sell to military bases.

Brian is executing many of the marketing concepts Matt introduced him to with the help of an advertising agency. One of these concepts includes a series of explainer videos, helping to secure Cooper Windows’ position as the expert in Smart Windows.

“Each phase has educated us, and each time we meet with Matt we have new ideas. We lean on him for a lot of things. Matt keeps us focused and nourishes us with confidence, which helps us to achieve results.” – Brian Cooper, Owner, The Cooper Group, Cooper Windows

“Working with Brian and his team has been incredibly enriching, and it’s a pleasure to work with such a genuine, hardworking and entrepreneurial team. I look forward to a long-lasting advising relationship, and seeing the results of Brian’s hard work and dedication to his craft.” – Matt Nemeth, CTSBDC Business Advisor