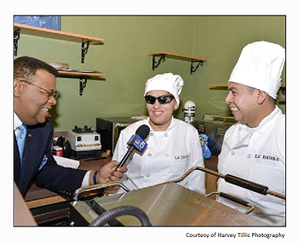 Chef Laura Martinez was born in Mexico and has been completely blind since infancy. She learned to love cooking in her grandmother’s kitchen and years later, through hard work and determination, became the first blind student at Chicago’s prestigious Le Cordon Bleu.

Shortly after graduation, while serving an internship at an area non-profit, local celebrity Chef Charlie Trotter tasted her cooking and immediately offered her a job in his restaurant.

Chef Martinez thrived in the position until August of 2012, when Trotter closed the restaurant and she found herself unemployed.

Undaunted, Chef Martinez decided to open her own restaurant and sought out the help of one of the Chicago area SBDCs, where she was counseled by then SBDC Director Andrew Fogaty. Though disabled, Chef Martinez was never late for an appointment and, after two years and numerous meetings, is now fully funded and opened her restaurant, La Diosa, in early January, 2015.

After doing some research, Fogaty found that La Diosa appeared to be the first time a blind Chef has opened their own restaurant in the country. He alerted the media, which resulted in on-air segments from local affiliates of ABC, NBC, CBS, Fox and Univision. Nationally, Telmundo carried the story. There has even been some international exposure through a TV network in Spain.

Coincidentally, La Diosa, at 2308 N. Clark in Chicago, is located just a few short blocks from where Charlie Trotters used to be.

Through diligent work with the SBDC Center, Chef Martinez was able to obtain a grant from UIC for $5K, a microloan from Accion for $7K, and a grant from the Illinois Department of Rehabilitation services for a little less than $29K. In addition, the SBDC has assisted Chef Martinez in writing a business plan, permitting, licensing and incorporation.

The SBDC at NORBIC continues to work with Chef Martinez as she builds her client base and looks to the future.