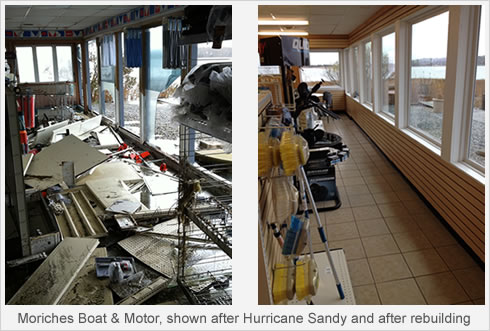 Moriches Boat & Motor is a full service boat yard, marina, and new and used boat and motor dealer located in East Moriches, New York. It has operated under its current name for 51 years. During Super Storm Sandy the building and property received record flood damage with over three and one-half feet of water affecting the inside of the building which houses a retail parts showroom, general offices and motor repair shops.

The flooding caused one building wall directly facing the bay to move from its foundation and a second wall which contained floor to ceiling windows to ‘blow out’. This allowed water, with wave action, to enter the building and “churn” the contents. All of the major systems were lost. This included the phone system, electricity distribution, boat handling machinery, a section of floating dock, gas storage tank and gas pump, shop tools, mechanics’ tools, office furniture, marine parts for resale, and the most irreplaceable item of all, a technical library containing engine service manuals from 1955 to present.

Two days after the storm, Moriches Boat & Motor was back in operation using a portable generator, phone lines forwarded to cell phones, and a backup computer system.  This temporary arrangement enabled service work to be performed and customer questions to be answered. While the service department staff worked on the outside customer clean-up and service work, management gutted the building and began restoration work. By the end of the first week, a new phone system was installed and electric service was restored.

Contractors were hired and all restoration work was performed to the highest FEMA storm guidelines to mitigate future damage. Working concurrently with insurance adjusters, Small Business Administration disaster representatives, NY Rising disaster recovery personnel at the NY SBDC at Stony Brook, and the Town of Brookhaven, Moriches Boat & Motor employees worked seven days a week to prepare for the upcoming boating season. Dock work reconstruction was completed in March of 2013, in time to receive the first customer boats for the 2013 season. All inside work on the retail showroom and office space was complete by the middle of April, with a grand reopening held in June, 2013.

With an SBA Small Business Loan of $225,500 and NY Rising grants totaling $100,000, two major reconstruction projects where completed in 2014. A new gas tank and pump system began operation in May, and new galvanized boat storage racks were in use by September. Super Storm Sandy had a storm surge of nine feet locally in this area. The new gas tank pump system has been elevated to withstand a storm surge of 13 feet without damage and can be quickly disassembled to move to higher ground if needed. The dock system has been re-engineered to withstand a surge as high as 15 feet. Conrad Kreuter has been able to return his business to normal operations and has worked to help other small businesses to get NY Rising assistance.  Moriches Boat & Motor received the SBA Phoenix Award for 2015.

Conrad Kreuter is the owner/operator of Moriches Boat & Motor, East Moriches, NY, since June 1989. Conrad purchased the business after a long career in electronics engineering and computer chip sales, where as new account development district sales manager, he felt there was a need for a consumer focused service business. The previous owner of Moriches Boat & Motor wanted to retire but was willing to stay on for 18 months to help with the transition to new ownership. In fact, the previous owner stayed on for over 4 years, repairing boats and motors during the day, and occasionally providing a well-seasoned sounding board for unique business problems that popped up.

Conrad has been a member of the Association of Marine Industries, and board member and past president for three terms. He is also an executive board member of the Empire State Marine Trades association, where he also served as president for three terms. He has been active is issues involving the marine trades for over 23 years and has helped in writing legislation to benefit the marine industry.

Conrad was one of three members of the Association of Marine Industries that developed an industry- wide service technician training program in conjunction with Western Suffolk BOCES that seeks to train entry level repair technicians. The Marine Technical Specialist program started in 2005 and is a two-year certificate program. The program has placed many service technicians into jobs in the marine industry on Long Island. Conrad is the lead instructor and course developer for this program.

Conrad is also a Professor of Marine Engineering at Kingsborough Community College in the Marine Technology department, which trains individuals to become Coast Guard licensed Captains. The student receives an AAS degree and a 200 Ton Captains License upon graduation. Graduates are employed as mates, deck hands and members of the engine department on dinner cruise boats, passenger ferries, tug boats and sightseeing boats in and around NY Harbor.

The New York State Small Business Development Center (New York SBDC) – the premier business assistance organization in New York State – provides expert management and technical assistance to start-up and existing businesses across the state. Since 1984, the NY SBDC has worked with 400,847 businesses, helping them to invest $5,464,324,837 in New York’s economy and create or save 177,095 jobs. Through a network of 24 regional centers, the New York Small Business Development Center delivers high quality business counseling and training to New Yorkers who want to start a business or improve the performance of an existing business.