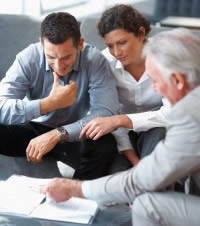 It’s just another way of describing what FranNet, the international network of franchise consultants, does for its clients (at no cost!): Introduce entrepreneurs to the small businesses of their dreams.

What do all the online dating service commercials say?

We use our special 46-point formula to determine the precise mesh points for you and the romantic partner you’ve been waiting for along a 13-axis spectrum of compatibility. Or something like that.

Sometimes it works, sometimes not. But what if you took the same basic idea, simplified it and applied it to the world of franchising?

And a lot of bright, skilled people — from recent college graduates trying to find work and pay off their student loans to former corporate executives in their 50s looking for fresh starts and dependable retirement income — are flooding the job market.

FranNet’s job is to take stock of clients’ interests, life goals, desires and skills and find franchise companies that match them.

That’s what we mean by “franchise matchmaker.”

Corporations and other large institutions like universities do the same thing. When a large corporation needs an executive vice president’s position filled, it contacts its corporate recruiters — “headhunters” — who search for the best candidates to fill the position.

That’s what FranNet does, too — but on a smaller, more intimate scale. Buying a franchise isn’t just a major career step. It’s a deeply personal thing.

When you start a business, you can’t just drop it if it’s not working out. You’ve invested time, money and energy. The fit has to be just right for franchisor and franchisee alike, or it won’t work.

At FranNet, we take that responsibility very seriously. It’s why our more than 75 skilled franchise consultants in the United States and Canada spend so much time and care with each client, making sure they understand just what the client is looking for.

In Canada, FranNet of Southern Ontario President Gary Prenevost walked Oliver Howey, laid off from his job in — what else? — employment assistance services, through his options before Howey found his new job owning a home tutoring franchise.

FranNet West President Cari Vinci helped former commercial real estate agent Richard Kerr survive the crash of California real estate and get a fresh start through ownership of an urgent care franchise. Kerr is 60. It might seem like an unlikely pairing. But people never know until they try.

Think franchise ownership might be your professional heart’s desire? Check us out at www.frannet.com and consult, for free, with a local franchise expert who might just introduce you to the job of your life.