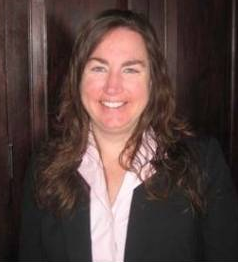 As the Finance Director for Mountain Village in Telluride, Erin Neer saw gaps in the government accounting system that she thought she could fix. “Technology in government systems hasn’t evolved as quickly as it has in the private sector,” she deduced.

Neer believed she could provide these services best from the vantage point of an entrepreneur, so she started her own business, headquartered in Dolores, Colorado. As the previous owner of Anytime Fitness in Durango, Neer knew Joe Keck from the local SBDC. She explains, “I wanted to introduce him to my new product because I knew that he knows people in local government.”

Her product, MUNIRevs, allows businesses to log in to a secure, self-service portal to renew licenses and submit their taxes to the municipality where they conduct business. They can log in, report sales and pay taxes in minutes. Her patent-pending software will save government agencies significant time and money in processing. It also makes it easier and more convenient for small business owners.

“If businesses aren’t doing it on-line, it takes days for the municipality to collect the mail, key-in the data by hand, and know how much tax money was collected. With our system, they can calculate the tax revenue immediately and know if they have made budget for the month or the quarter.” 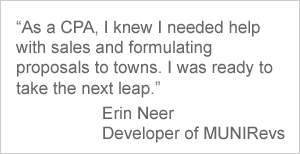 She chose the name MUNIRevs, and the slogan “Capture Every Dollar,” because she realized that the automation and web-based technology of her system creates enhanced revenues for municipalities and reduces their processing costs.

Neer spoke to Joe Keck about her confidential business plan and asked for assistance where she needed it.

Keck, “as a huge resource,” connected her to advisors Gary Masner, John Skowlund and Jim Mackay, who had expertise in areas that she needed.

Masner provided his expertise on RFP’s (Requests for Proposals) and securing government bids. Skowlund helped with Sales and Marketing, as well as formulating pricing models, and Mackay helped with the Technology and Funding aspects of the business.

Since August of 2011, the MUNIRevs paperless system has processed over $8 million in revenue – with the first payments being submitted in December of 2011. MUNIRevs also won a competitive RFP for the City of Englewood, Colorado, and Neer is thrilled that that several other communities have indicated they will be coming online as well.