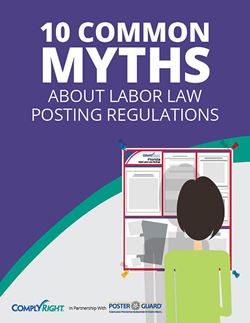 Posting compliance is a lot more complicated than most people think. In fact, there are common misconceptions about this mandatory government requirement – even though it applies to every U.S. employer. Let’s look at the top three.

“Government fines are so small, it’s no big deal if we don’t post.”

“There are no poster police out there … so how would I even get caught?”

It’s not unusual for business owners to underestimate the importance of posting compliance or to think the risk is so minimal it doesn’t really matter. But this could get you in trouble.

First, when it comes to the fines, the amounts are steep — and they can add up significantly if you have violations at multiple locations. On just the federal level, fines can be more than $33,000 per location for posting violations.

On a state and local level, the government posting fines are typically between $100 and $1,000 per violation. (Each posting carries its own fines, because every agency and posting law is different.)

What About the Poster Police?

The second misconception is that no one polices posters, so there’s no need to worry about fines. True, the federal government rarely sends out representatives JUST to enforce posting laws. (This is more likely on a state or city level, when an enforcing agency or state attorney conducts a sweep of local businesses.)

This doesn’t mean you’re free from federal fines, however. Federal-level posting fines typically are assessed because an agency is on your premises for another reason. It could be a Form I-9 audit, an OSHA inspection, an EEOC on-site investigation or even a Department of Labor (DOL) follow-up to an employee complaint. The complaint or investigation could be completely unrelated to labor law posters, but the agencies will check posting compliance as part of an onsite visit.

It’s Not Just About Government Fines

The real danger with posting violations concerns employee lawsuits and disputes. Cutting corners with posting compliance could hurt you in two ways:

But problems can occur if there’s a posting violation. If you have an outdated poster — or no poster at all — the courts may decide that the statute of limitations doesn’t apply because you didn’t notify employees about their legal rights and responsibilities in the first place. You can’t use it as a defense, and the case may move forward against you.

“Bad faith”: Another way posting compliance comes into play is as evidence of “bad faith”. This term refers to an intentional dishonest act by not fulfilling legal obligations. A finding of bad faith can directly affect your damages in an employee lawsuit — either by inflating a damage award against you, or standing in the way of a good-faith defense that would otherwise reduce or eliminate your damages.

• Posting Law Myth #2: My Workers’ Comp Provider Gives Me Everything I Need for Free

It’s true that many workers’ comp insurance providers supply certain posters to their clients as a convenience. However, they typically supply only a few of the required federal postings (the OSHA safety poster, most commonly), and may not provide any state or local postings at all. And they rarely supply updated postings when requirements change. Remember: Partial compliance equals partial protection.

Federal, state and local agencies don’t work together often, so there’s no central place or website for all the necessary posters you are required to post. In fact, about 175 agencies nationwide are responsible for issuing at least 370 mandatory posters.

To manage posting compliance for just one business location, you would have to contact up to nine agencies for federal and state posters. On top of that, around 22,000 U.S. cities and counties have their own governing agencies and ordinances. Not all of them have required postings, but many do.

To handle posting compliance on your own, you must research every posting requirement (and change) and contact the appropriate agencies in your jurisdiction — federal, state and local. This takes considerable time and effort, which makes it a daunting task for most businesses.

• Posting Myth #3: Posters Only Need to Be Updated Once a Year

Labor law posting requirements change all the time, not just once a year.

Perhaps your business is in a state where the state minimum wage rate increases once a year (typically January), so you update your posters then. However, if you ONLY update your posters for the minimum wage change, you could be out of compliance throughout the rest of the year when other postings change. The laws affecting postings are revised all the time — whether it’s new laws being passed, or existing laws being amended or repealed.

On average, there are 150 state posting changes a year — and at least half of these require an immediate poster update or replacement. Local changes occur even more frequently. If you’re only updating your posters once a year, you may be compliant with your state minimum wage, but you’re at risk of noncompliance with other postings.

There are seven more common myths about labor law posting regulations. Download the e-guide here and learn exactly what it takes to be in complete compliance.