Building a Business in Construction 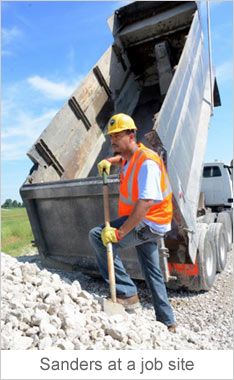 It’s well after 5 p.m., but Will Sanders, owner and co-founder of A-Plus Contractors in Saint Charles, Missouri, a certified Minority Business Enterprise (MBE) and Disadvantaged Business Enterprise (DBE) specializing in dump truck work and heavy equipment hauling, excavation and power washing throughout the St. Louis area, is excited. But also a little tired.

“I am just a hard-working, ordinary guy,” he says of himself. “I am boots on the ground, boots in the office all day.”

Those boots are getting a lot of wear at Lambert Airport tearing out old concrete, hauling dirt and old concrete, laying new concrete and even planting trees as a subcontractor. And they’ll get even more on projects soon underway around Maline Creek, a small tributary of the Mississippi River on the northern edge of the City of St. Louis that’s suffered from severe erosion, and on the seven decades old, deteriorated Route 47 Missouri River Bridge, among other projects.

Sanders has almost a quarter century of industry experience, and he established the business in 2009. But the business didn’t really take off until 2014, when Sanders purchased his first dump truck.

That number has swelled to seven in just a year. He jokes he spends his lunch hour shopping for trucks. Sanders expects company revenues to be about $500,000 this year, significantly up from 2014.

“I pray about it, to be honest,” he says of his firm’s explosive growth. “We need to be cautious, grow the right way so we can feed these families. It used to be just my little family. Now I have to take care of six families!”

This growth, he says, can be attributed in part to attending a 10-session FastTrac Growth Venture class facilitated and delivered by Lynette Watson, business development specialist with the St. Louis Small Business & Technology Development Centers (SBTDC). The goal of the class is to help MBE and DBE firms like Sanders’ develop their capability and capacity to better bid on Missouri Department of Transportation (MoDOT) projects like the upcoming Route 47 bridge project.

The MoDOT FastTrac Growth Venture class helped him build a stronger business structure, he says. And merely being in class every week for 10 weeks helped build the relationships vital to any business’ success. 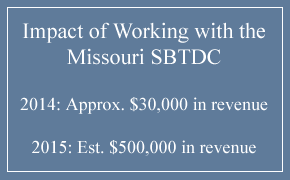 “They were instrumental in helping us understand how to properly develop a business and how to operate the business today,” he says, a process that included developing a good business plan, marketing the firm correctly and understanding costs. “We were able to use that information to develop financial plans, make changes to our business model with the checks and balances taught in class, understand the scope of risk. The tools we learned are serving us well.”

“They [the SBTDC] are really good at what they do. Where we are at today would not be possible without them.”

The course also brought in industry professionals in fields as diverse as insurance, finance, marketing and botany, allowing Sanders to bond with a banker and an insurance agent, both of whom he now counts as partners.

And he’s grateful to Kevin Wilson, director of the St. Louis SBTDC, for helping him secure a loan through the Contractors Loan Fund (CLF). These loans are made possible by a coalition of local governments, non-profit organizations and small to large private sector businesses committed to greater minority participation in construction projects regionwide. CLF partners pool their financial and technical business resources to make construction and expansion loans to minority- and women-owned businesses.

And he says Watson and Wilson are always available to advise him. “My class ended several months ago, but I know I can always catch them by phone. They’re very accessible, willing to help anytime.”

The next step, he says, will be to empower his new team members to take on more active roles. Sanders knows he’s not a mom-and-pop operation anymore and can’t be everywhere at once.

To learn more about the Missouri SBTDC, visit missouribusiness.net.