From TSheets, by Quickbooks –

Survey asks employers and employees to weigh in on remote workers’ performance and productivity.

When it comes to answering the question “Are remote workers actually working?” it’s easy to hear some skepticism behind the text. “Working from home” often comes with its own set of air quotes, like it’s code for “hanging out” or “watching Netflix.” But is that skepticism deserved? Or are remote workers getting a bad rap?

While they are working remotely, the majority of these employees are also taking care of a few personal errands, whether it be picking the kids up from school in the afternoon or taking the dog for a walk around midday. When asked how much time they spend on personal tasks, remote workers fessed up about that, too.

70% of employers said they thought their remote workers were sometimes taking care of personal tasks while on the clock, and nearly 25% said they estimated that time to be about two hours a day.

So what’s going on here? If bosses know their remote employees aren’t always working, why not call back the troops? What’s keeping employers from demanding their remote workers stop wasting time?

If there’s one thing we learned from our remote workers’ campaign, it’s that no one’s pulling the wool over the boss’s eyes. Whether they make it known to their remote workers or not, most employers are well aware that employees working from home aren’t locking themselves inside their home office. Still, every relationship built on trust has its limits, and it’s important that remote employees know those limits, for the good of everyone involved.

When asked about that trusting relationship, 72% of remote employees said they believe their boss trusts them to work independently. Similarly, 3 out of 5 said they’ve never had to justify their work when working remotely.

For bosses, the answers were a little different but still positive. 99% of employers said they “sometimes” or “always” trust their remote employees to work independently. That’s 26 percentage points higher than remote workers answered.

What’s more, bosses understand a lot of the more subtle challenges remote workers have, completing their duties outside the office. For instance, 31% of remote workers said the thing they missed most about working in an office was social interaction. 14% said they didn’t feel they were part of a team.

What employers of remote workers typically pay for

‘Working from home’ doesn’t mean the same thing for everyone

In some ways, remote workers are just like any other employee. They have occasional bouts of unproductivity. They have their own struggles and measures of success. 17% said they get overlooked for promotions, while 11% said they sometimes get left out of the decision process— feelings all workers have at some time or another.

Remote workers also aren’t blind to how others might see them or how they might improve their performance. 1 in 3 felt a more structured workday could improve productivity. 1 in 5 felt a dedicated home office would do the same. Employers looking to help their remote employees make the most of their time on the clock—be it at home or somewhere else—should not be afraid of asking these individuals how they might be more productive. Then challenge them to make that change and report the results.

Performance and perception aside, it’s important to remember that when it comes to remote employees, one size does not fit all. Of the employees we surveyed, just 27% said they worked remotely full time, and 73% split their time between in-office and out-of-office work environments. 1 in 3 had a dedicated home office, while 1 in 4 did not but still worked at home. 15% said they worked at a client’s home, while nearly the same number reported working from a variety of locations.

Where remote workers are working 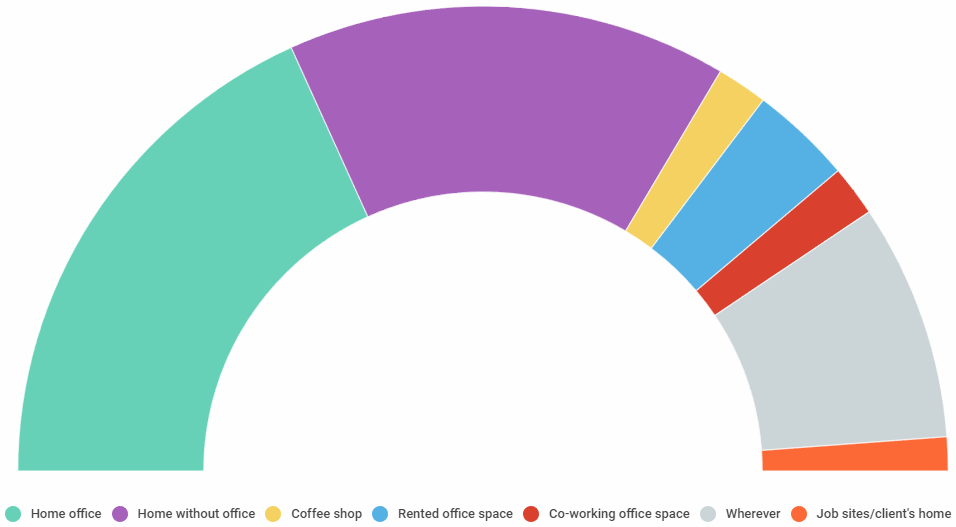 While having a dedicated home office might be the solution one remote worker needs to be more focused, for another, such an arrangement may not be possible. That’s why it’s important employers look at their remote worker arrangements on a case-by-case basis and avoid blanket policies that could ostracize otherwise exemplary employees.

‘Working from home’ does mean ‘working’

So whether you’re the employer of a remote worker or an employee who works remotely, take heart: There will always be those who surround “working from home” with an air of skepticism, but as long as the work gets done and done well, who cares if someone’s walking their dog?

For additional questions that were a part of the survey, click here, and scroll to the bottom of the page.

This article was first published by TSheets and is republished with permission.

*Methodology: TSheets commissioned Pollfish to survey 632 American employees in January 2019, aged 18+, who work remote at least one day a week, to learn more about their work habits. Additionally, TSheets commissioned Pollfish to survey 632 business owners and hiring managers, aged 18+, who have at least one remote worker in their workforce, to find their views on their remote workers’ habits. TSheets designed and paid for the survey and welcomes the re-use of this data under the terms of the Creative Commons Attribution License 4.0, which permits unrestricted use, distribution, and reproduction in any medium, provided the original source is cited with attribution to “TSheets.”