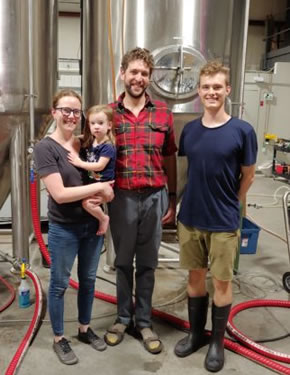 In December of 2018, after five years in business, Kelly and Ricky Klein of Groennfell Meadery announced they would be closing their popular tasting room and restaurant in Colchester. “There is no question that this was the hardest decision we had to make about growing,” they wrote in a blog post on the company’s website. They had developed a loyal clientele and would miss the regulars who came in for weekly events and conversation.

But closing their Colchester location was a critical step in the company’s growth process. In July, 2019, Groenfell Meadery moved into a new facility in St. Albans. The larger space has enabled the Kleins to triple their brewing capacity. Their mead is now available in cans and on draft throughout New England.

The Kleins first reached out to the Vermont Small Business Development (VtSBDC) in January, 2013, on a referral from VPTAC. They were seeking resources and advising on growing their business in the areas of marketing, pricing, and access to additional capital in the future. Over the years, the Kleins have taken advantage of the business resources and mentoring services available through VtSBDC. END_OF_DOCUMENT_TOKEN_TO_BE_REPLACED