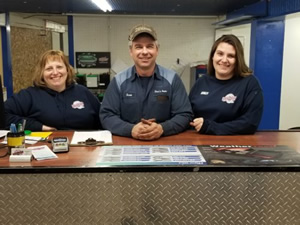 “They are honest, capable, and efficient, and it’s good to know there’s a local auto shop with friendly people I can trust to do a good job with my car.” This is just one of nearly 700 five-star customer reviews that say, in one way or another, the same thing. Don’s Auto Service is known for its friendly service, honest work, and fair rates.

The auto shop has been a staple in Derby, Vermont since 1979. Unlike many second-generation businesses, its reputation hasn’t suffered with the passing of the baton. After his father, Don, passed away in 2001, Scott Keenan became part-owner of Don’s Auto Service with his mother, Cheryl. Scott’s wife, Deanna, and daughter, Ashley, also work at the shop.

After becoming a partner in the business, Scott realized that they had outgrown their existing space. He identified a larger building for sale that would fit their needs. But to secure financing for the purchase, he needed to prepare a business plan and financial projections. That’s when he reached out to the Vermont Small Business Development Center (VtSBDC). END_OF_DOCUMENT_TOKEN_TO_BE_REPLACED