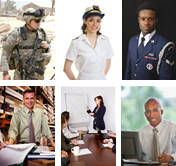 The transition from combat to business owner isn’t always easy – luckily hundreds of organizations and groups are eager to assist veterans and help them succeed.

Veterans are an incredible asset to our country. Not only do these brave men and women sacrifice years of their lives to serve the United States, but after returning to civilian life, they bring unmatched strength, skills and perseverance.

Leaving the military holds a number of unknowns, but for nearly a quarter of veterans, entrepreneurship is the clear next step. According to the most recent data available from the U.S. Census Bureau, in 2012 an estimated 2.52 million businesses were majority-owned by veterans, employing more than 5 million workers. While these numbers are down from the post-World War II business boom, entrepreneurship is still a popular second career option for our nation’s veterans. END_OF_DOCUMENT_TOKEN_TO_BE_REPLACED