2 Days to the Congressional Showcase! 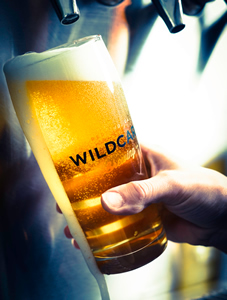 It started when Jeff and Jenny brewed two beers to give away as wedding favors at a brewery in San Luis Obispo, where they went to college. Homebrew projects and burst bottle explosions ensued in the years after. But a casual passion soon turned career as Jeff announced to Jenny that he had quit his job and had been accepted off a wait-list to brew school. You’d call them crazy, adventurous, unpredictable… a wildcard. Their story is one of the unexpected; a place where there are no limits, where perseverance and a free spirit will turn dreams into reality.

Wildcard Brewing Company opened its doors in November of 2012, with 4200 square feet of open warehouse space, a 10-gallon pilot system and a small, bare bones tasting room. For a year, the brewery serviced local accounts through a contract brewing relationship. It wasn’t until September of 2013 that they revealed a 15-barrel production brewery at the location off Crossroads Drive. END_OF_DOCUMENT_TOKEN_TO_BE_REPLACED