6 Days to the Showcase! 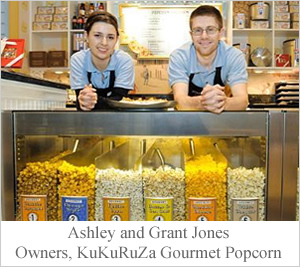 Create great gourmet popcorn and the world will beat a path to your door.

At least that’s been Grant and Ashley Jones’ experience with their Seattle-based business, KuKuRuZa Gourmet Popcorn. This winter, popcorn is flying off shelves in the Puget Sound as tasty treats for Christmas and Kwanzaa celebrations, but its appeal is broader than that.

Earlier this year, a KuKuRuZa store opened in the Hayat Mall in Riyadh, Saudi Arabia, where customers were invited to break the fast of Ramadan with flavors first developed in the Jones’ Woodinville garage just three years earlier. The franchise agreement calls for up to 25 KuKuRuZa stores to open in the Middle East in the next five years. Other possibilities are being discussed in Japan, New Zealand, Australia and India.

With assistance from the Washington Small Business Development Center (SBDC), Jones was able to build a comprehensive export and franchise strategy, without short changing the needs of his growing domestic market. The Washington SBDC provides no-cost business advising to small business owners.

As part of that comprehensive strategy, this month KuKuRuZa opened a 5,400 square-foot distribution center that will allow the company to keep up with burgeoning demand, not just at brick and mortar stores, but through online sales as well. 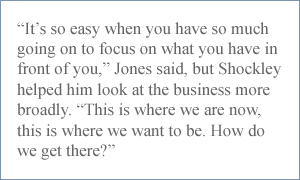 KuKuRuZa is to Cracker Jacks what Triple Crème Brie is to Velveeta, but better. The Joneses spent a year perfecting the flavors, working to get exactly the right combinations of sweet and salty, crunchy and chewy.

Popcorn lovers at KuKuRuZa in downtown Seattle or in Ballard or at their sister store, Popcorn Pavilion in Bellevue, can choose from up to 25 flavors, ranging from old favorites like Hawaiian Salted Caramel to seasonal treats such as Eggnog Brandy. The popcorn is also sold online at kukuruza.com.

When too much of a good thing is, well, too much, popcorn dressed up in delectable accessories—from rich chocolate to roasted nuts to savory spices—should deliver exactly the right flavor for the crunch. Jones said he knew they had it right when the whole was better than each of the component parts.

“Seattle, it turns out, carries a lot of weight,” said Jones, trying to explain the international appeal of his three-year-old company.

Home to Starbucks, Microsoft and Amazon, Seattle has global cachet as a center for innovation and high-end entrepreneurs, Jones said.

Jones freely admits that his inspiration was Garrett Popcorn, the Chicago-based company that made a combination of cheese and caramel popcorn famous. A relative first suggested the business opportunity after noticing long lines for popcorn whenever he traveled through O’Hare airport.

Prior to starting the popcorn business, Jones was a partner in an urban farming project. Retail was a new challenge, he said, but he and Ashley figured it out as they went. They opened Popcorn Pavilion in Bellevue in December, 2009. Then in April, 2011, they acquired KuKuRuZa at Third and Pike in Seattle and made plans to expand that brand. Another KuKuRuZa store opened in Ballard in June, 2012.
But, when faced with the prospect of negotiating an international franchise agreement, they decided to contact the Washington Small Business Development Center.

“We had zero experience in franchises or in international trade,” he said.

Jones began working with Rich Shockley at the SBDC office at Highline Community College, and Shockley called in Joseph Vogel, an SBDC international trade specialist. The Washington SBDC is a program of the U.S. Small Business Administration, Washington State University and other economic development agencies and institutions of higher education.

Suddenly, Jones had immediate expertise in franchise agreements and international trade. Vogel even had specific experience in the Middle East, Jones said.

Vogel’s experience and expertise allowed them to construct a thorough international expansion strategy, Jones said. Working with the SBDC, he said, enabled him to move forward methodically and purposefully, rather than simply reacting to sporadic demand or new franchise inquiries.

In addition to helping with the franchise agreements, Jones said, Shockley and Vogel also helped with strategic planning.

“It’s so easy when you have so much going on to focus on what you have in front of you,” Jones said, but Shockley helped him look at the business more broadly. “This is where we are now, this is where we want to be. How do we get there?”

Four years ago they never imagined they’d be where they are now, but with a solid business plan in place and trusted advisors to consult when necessary, it seems they are in a good place.

“Once you open the doors, you never know what’s going to happen,” he said.

The America’s SBDC Client Showcase & Reception will be held from 5:30-7:30 pm on Monday, February 1, 2016, in Caucus Room 345 of the Cannon House Office Building . Invite your Members of Congress to the showcase and reception! Contact your Representative and your Senators.

For more information about America’s SBDC or to find an SBDC near you, visit www.AmericasSBDC.org.