9 Days to the Showcase! 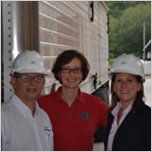 It’s no wonder that Dr. Amir Varshovi was recognized as the 2014 U.S. Small Business Administration (SBA) Small Business Person of the Year for the State of Florida. Along with his business partner, Marla Buchanan, Varshovi has demonstrated success in two areas that are critical to the growth of a strong national economy – expansion into international markets and development of sustainable green technology.

Varshovi arrived in the United States from Iran in 1972 as an undergraduate student. The son of an English teacher, and a self-professed researcher by nature, he admits playing with chemistry sets when he was a little kid. He went on to complete his Ph.D. in soil and water science at the University of Florida. While working as a researcher, he hired Buchanan, then an undergraduate student, to work in the lab. They were an unlikely pair given Buchanan was a criminal justice major. Buchanan went on to law school and became a shareholder in a successful Jacksonville law firm, but the two kept in touch, and when the time was right, they began working together again to start Green Technologies.  END_OF_DOCUMENT_TOKEN_TO_BE_REPLACED